EXHIBITION OF NIKI PAPATHEOCHARI
AT THE MONTPARNASSE MUSEUM – PARIS (2007)

Montparnasse is an old story where legend has shaped the destiny of the Republic of Arts and Letters. At the time of François Villon, the Renaissance, the Pléiade, Henri IV and the Fronde, the “Escholiers” of the Sorbonne and the Latin Quarter came to declare poems, to flirt and to lute the female gender there. Inspired, they baptized it Mont Parnasse. 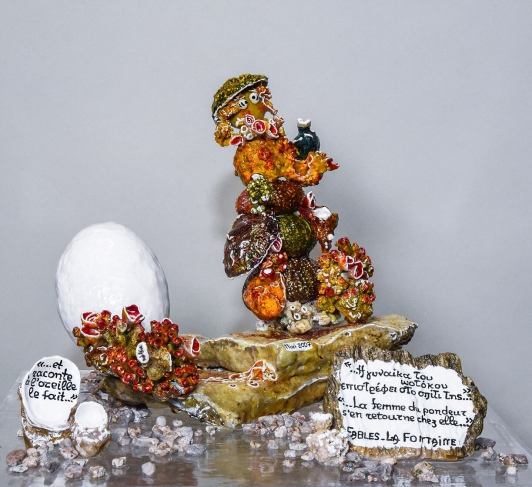 It is an associative reference that relates to pre-aesthetic forms of the theater, which found their aesthetic improvement at Mount Parnassus in mainland Greece.
Over the centuries, it became the Navel of the Universe.

In Greece, it is the highest mountain in the Phocis which rises to 2,536 meters above sea level. It has two famous peaks: one was dedicated to Apollo and the other to Dionysus. Between the two peaks is born the Castalia fountain, the inspiring source par excellence. The ancients imagined it at the center of the world.
This divine natural landscape was destined to become the cradle of the theater, the history of which begins with the cult of Dionysus.
Since the theater fulfills universal sociability it was the only means of expressing religious worship, since its origin dates back to the birth of metaphysical and religious fear.

Dionysian worship is an exteriorization of human biological need provided that it releases its energy and that it is well disciplined with its imitative instinct.
Dionysus (Bacchus), son of Zeus, had been dismembered by the Titans and then resurrected by his father. Coming out of Aedes, driven by a burning desire to live again, he bursts into a frenzy that only the discipline of rhythm could calm. This frenzy, this ecstasy, this mania (menade, bacchante) represent the predominant part of the ancient Greek religion.

Bacchic worship was consolidated in Greece for centuries. The “Bacchanalia”, modified over the years, ended up giving the developed form of the classic tragedy of the 5th century.
The cult of Mount Parnassus is also linked to the name of the god Apollo. Since his birth, he had decided to found an oracle, the first in the world, to declare the will of his father, Zeus. After several adventures, in order to find the place that would suit his religious dream, he approached the steep rocks of Mont Parnasse. Arrived at the fountain of Castalie, a monstrous female snake kept it and devoured any being and animal which passed by there. He struck it to death with an arrow. “Pythou!” (“Rotten!”) he said to it. Now Apollo will take the nickname “Pythios” and “Pythia”, the priestess of the temple he founded. It’s here that Apollo’s name became a song sung by the world.

We see on the plan of Boisseau of 1654, a small mount called Le Mont Parnasse or La Fronde already revealing to us the rebellious nature of the Rive Gauche. Currently, it peaks at 64 meters. Jouvin de Rochefort’s plan of 1672 shows us the hill, duelists, quarry winches, a shepherd and sheep. At that time, Louis XIV had decided to destroy the enclosure of Charles V in order to embellish Paris. He enlarged his good city from Noble Faubourg to Cours du Midy.

At the beginning of the 18th century, the Duke of Maine broke through the avenue of the same name, it was paved. This road allowed the son of Madame de Montespanet and Louis XIV to go from his hotel in the rue de Varenne, the current Rodin museum, to the castle of Sceaux. The Duchess of Maine maintained a beautiful and spiritual court there. A pupil of La Bruyère, the little daughter of the Grand Condé, she became the muse of Voltaire; Montesquieu and d’Alembert courted her. She made the link between the Grand Siècle and the Age of Enlightenment. Saint Simon will say of the duchess: “Of the spirit, she had infinitely.”

At the time of Louis XVI, it was decided to raise the Wall of the General Farmers. “The wall walling Paris made Paris murmuring”. In 1786, the barrier of Montparnasse was built at the current site of the Edgar Quinet metro station and the start of Place Ferdinand Brunot. Dating from 1773 and 1786, rue du Montparnasse gave its name to the barrier and the old Cours du Midy, the current boulevard du Montparnasse. In its time, it was the entrance to the sanctuary of Apollo, the Muses and Dionysus which led to rue de la Joie, rue de la Gaîté.

In the 19th century, the sanctuary moved to Montparnasse station, the Grande Chaumière ball, Closerie des Lilas and BalBullier. In 1911, boulevard Raspail was opened at 109 boulevard du Montparnasse. Thus were born the legendary cafes; the Dome, the Rotunda, the Select and the Dome.

At 21, avenue du Maine is one of the many artists’ cities of Montparnasse. It was built with materials from the 1900 Universal Exhibition, just like the Beehive. It is found in quarries dating back 49 million years. At that time a warm sea covered Paris. Sand and shells will form limestone over time.

In 2007, other “shells”, with the meeting of the past, the present and millennial mythologies, revisited by Niki Papatheochari, opens in this place of Mont Parnasse strewn with artistic memory, a new ambition brings: The creation of a indelible link between Greek and French artists to revive the myths that artists from around the world have borne and testified in this district in the 20th century.